Sometimes all the ingredients come along to make a modern day classic. We have Jessica Chastain, a strong showing from Oscar Isaac, JC Chandor pulling writing and directing duties, a moody 80s New York setting. Add to that an extensive out-pouring of positive critical reviews and nothing can go wrong, right? Wrong. All is not what it seems.

The premise is Isaac and Chastain play Abel and Anna Morales. Man and wife own and do the books for the Standing Heating Oil Company. While she’s juggling ever decreasing numbers on incomes sheets, he faces ever increasing odds to keep the company alive.

He wants to play it straight but his moral code is tested when his vehicles, containing the oil, are repeatedly stolen. With the loot missing, his financial situation is stretched. This becomes a vicious circle when he opts to purchase an oil terminal from a Jewish group but struggles to generate the required capital.

To make matters worse for Abel, David Oyelowo enters the fray as Lawrence who makes it clear he is investigating all his business deals. This prompts Anna to hide the books, even though they protest to playing it clean, and Abel feels the strain from all sides.

What follows is Abel facing attempted hits, one of his beaten drivers taking part in a shootout, and a race against time to keep his creditors at bay and get the cash for the terminal. The driver that secretly carried a firearm was Julian. The news of the impending criminal trial means the bank pull funding for the proposed oil terminal purchase.

Just what Abel needed. It also forms a subplot where Abel tries to find an on-the-run Julian so he can hand him over as a peace offering to Lawrence. Apparently, you’re not a tax evader if you give up gunmen.

It moves along with a steady pace but at times, not helped by the stylization, it feels more like a 70s TV detective movie than a well-produced blockbuster. The odd chase scene doesn’t levitate the film from its constant slumber. What we are left with is the hope Abel gets his money and identifies the thieves just to progress the story. 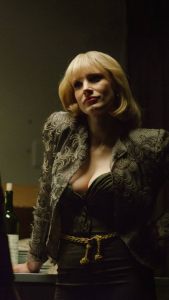 Many people that have been wax lyrical over this have been seduced by the styling – and dare I say it? – believing that applauding this movie is some sort of reference point for being in the know. It’s a certain level of snobbishness that makes a person say this is a good film based on a below average script (it’s riddled with plot holes right up until the last scene), nostalgic cinematography, and a good performance from Jessica Chastain (when does she ever give a bad one?).

1981 may have been the most violent year on record in New York, this film however doesn’t reflect this. Everyone is in too much of a slumber to bother engaging in the violence we have to assume was happening all around them. It should be renamed: A Most Mundane Affair.