The build to RAW’s latest PPV wasn’t a smooth affair. Okay, put simply – it was underwhelming. The ratings don’t lie but a number of factors are at play. As ever, we can point fingers at WWE “Creative.” It’s also easy to say that the forever MIA Brock Lesnar hiding the much-derided Universal Championship doesn’t help.

The worst offender in recent times has been lazy bookings. Back to meaningless or repetitive matches and title changes signposted with future plans no longer a surprise.

This being said, the opening bout – the Intercontinental title match between Dean Ambrose and The Miz – should have been a damp squid. We’ve seen this mix months previous on SmackDown Live and those in the know have told us The Miz is being lined up for gold in order to play sacrificial lamb to Roman Reigns further down the line.

The stipulation here went against the ethos of the PPV. Instead of doing anything, it was a case of Ambrose losing the title should he get a DQ. That – obviously – played a large part of the narrative. As it should. But congrats to WWE for avoiding some contrived way to get Ambrose disqualified. Sure, they hinted at it, and made out he was close to doing something silly. But he didn’t.

The action in between these teases was good. The Miz really deserves all his props lately. He has always been strong on the mic, now he mixes it like a champ in the ring, and does bring prestige to belts.

He took the gold here by way of distraction. Not the obvious Maryse one. It was her expulsion to the back that allowed The Miz to throw The Lunatic Asylum into the ref and allow the official to debate his intention.

A skull crushing finale later, and we had a new IC Champ.

That was a solid base to the show. The filler that came was weak, topped with a healthy bun.

So why did the show fail between curtain opening and shutting?

It was a mix of things, individual to each match.

Take Sasha Banks and Rich Swann v Naom Dar and Alicia Fox. This one failed for a few reasons. First off, the style and pacing was something you’d expect to see on Main Event. In doing so, the joint-best female performer, Banks (Charlotte is the other), is degraded to making Alicia Fox look like an almost equal.

That’s like asking Roman Reigns to beat Undertaker then go twenty minutes with Heath Slater the next night.

Except here, the match was thankfully short. It wasn’t PPV billing, nor PPV class.

Alexa Bliss v Bayley didn’t actually fail for the reason some are crying about (crying like Bayley). It was wise to make Bliss look so dominant. She has been given the baton and the WWE needs to let her run with it.

It failed by allowing Bayley to go stale before our eyes. When she’s on screen, a feeling not dissimilar to the Cena effect occurs. But she doesn’t have his backing – just impending disconnect. There should have been a post-squash match change in attitude displayed by Bayley.

The steel cage match for the Raw Tag Titles was all about too many matches between the opponents in the weeks before, and tepid action once it began. It doesn’t help that the Hardyz are being begged to turn Broken by the WWE Universe. A cage match teased that chance.

Instead we got a few certainties. A Whisper in the Wind from the top of the cage and a Sheamus and Cesaro win. See, in wrestling, if a superstar (or team in this case) win too much en route to a PPV, it means the ones that seemingly have no momentum win.

They cash in the jobber tax (not to be confused with Jinder Mahal as WWE Champion, that’s the Jobber Lotto coming up trumps).

A final nail in this match’s coffin was how the idea of both teammates escaping didn’t fully explain the rule about reentry (which invalidates the initial escape).

Refer to Payback 2017 review regarding the Cruiserweight division. As a side note: if I were to offer any review for Neville v Austin Aries in their submission match for the gold, I’d have said it was very good. A good advert for 205 Live (which shouldn’t be a RAW element).

The Fatal 5-Way to become number one contender was a lift that brought the event back to the level The Miz and Ambrose set – and took it on a few more notches.

After a generic start – wrestlers taking it in turns to fight, hide, and showcase – an alliance of Samoa Joe and Bray Wyatt formed. This better controlled the traffic from Roman Reigns, Seth Rollins and Finn Bálor. It wasn’t long after this partnership broke down that Bálor went on the rampage. 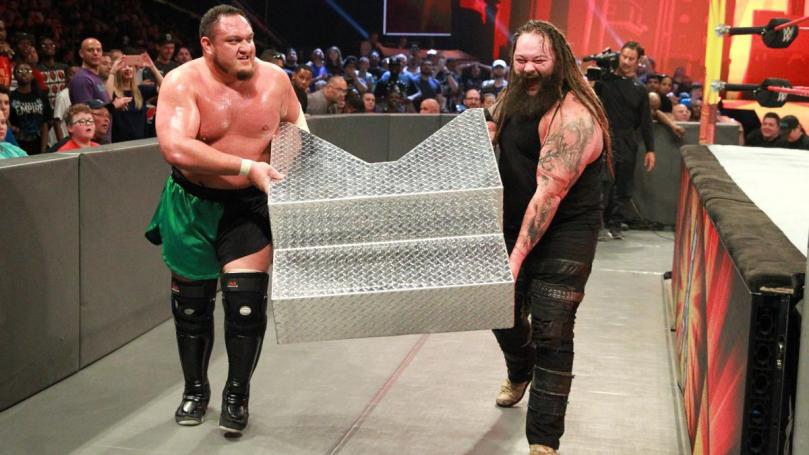 The kick Reigns took to the face from The Demon King from the ring apron looked legit and painful. As did a multiple body pile-up spear through the barrier from Reigns, and a Rollins splash through an announce table.

Reigns and Rollins was teased as the finishing pair before it became Reigns and Bálor. As the Big Dog ate a Coup De Grace from the Irishman, Joe snuck up behind and locked in the Coquina Clutch.

A well-balanced packed main event and a good choice of winner moving forward. He may be visiting Suplex City to take a defeat but he’ll still leave looking strong.