I haven’t watched a full WWE PPV since Evolution. I totally believe in the positive strides taken to recognise women in Sports Entertainment, and in that particular point in time, they deserved all the attention not because of the “Women’s Revolution” but down to the fact they were markedly better than the male counterparts.

I stopped watching WWE because of Bad Creative and the Saudi situation. Any company that can ignore murdered journalists and still collect a pay cheque is morally bankrupt. Evolution came at an unfortunate time for me to make that ethical choice. Once the PPV was over, the Network was cancelled.

On Saturday, I will again decide to become an active subscriber. (This will be on the back of one of my many personas who have yet to take a free trial.) Much has changed in the intervening period. I’ve become AEW – I’m All In. WWE has further morphed into the modernised version of eighties WWE that was trounced by an emergent WCW. If you can’t learn from history, you are destined to fail. Vincent K. McMahon doesn’t view history – he has a clearly defined end version he’s been trying to paint for years.

Starting Saturday, even Vince will be forced into parts unknown. Everyone around him advised it was best to have a WrestleMania delay. Vince refused. It could be he’s so stubborn, he needs to see WrestleMania chalked off his calendar on exactly the correct date.

It could also be that the most successful and influential wrestling promotor of all time knows how to make prosperity out of chaos.

WWE will always be able to say WrestleMania proceeded unabated. The pre-filmed nature means they can aim for a cinematic feel. Vince is on record saying he makes movies. This is his chance to make The WrestleMania Movie. The two-night affair is also a handy trial. The event has become too long. Now they have a chance to see if two nights, two main events, is palatable.

I’ll be watching WrestleMania this year because it’s a once in a lifetime experiment. If they get it right, it’ll be like nothing we’ve seen before – or will again. AEW has done a far better job with its crowd-less shows so far. It could be WWE has deliberately downplayed the Performance Centre so what we see this weekend blows us away.

The Showcase of Immortals has never been so intriguing.

Now, as long as The Fiend wins, Goldberg is exiled, The Man finishes looking strong, Charlotte Flair loses, Drew looks strong, The Undertaker comes as the American Bad Ass and Edge is retired with an RKO, WrestleMania will be a great success.

Soon after the Royal Rumble, SmackDown stars found themselves heading into the Elimination Chamber PPV. Unlike the Rumble, where the winner could have come from several angles, this year’s Chamber was easier to predict. This was the final cog in the machine before solidifying months of storytelling and the WrestleMania main event.

Not to belittle the earlier matches, but this wrestling fan was itching to see the main event. That’s not to say what preceded it was pointless. The SmackDown women’s division hasn’t eclipsed its counterpart on Raw like the men’s main roster has achieved since the brand split. This comes down to the fact Charlotte Flair and Sasha Banks are the best two female in-ring performers on the planet and are captivating characters.

So it was intelligent that WWE placed the returning Mickie James on the blue brand. What wasn’t so clever was David Otunga claiming she had ring-rust after being absent for seven years. In that time, she’s been TNA champion and wrestled on the independent circuit. WWE has no problem referencing characters fighting in, say, Japan or Mexico, so why does it continue to ret-con TNA out of existence?

It’s not as if TNA is an actual threat to WWE.

The match she was in was against fan-favourite Becky Lynch. While being a solid affair, and the Irish Lass Kicker’s victory won’t damage James in any way, it leaves the question as to where this rivalry goes from here. Is it just a case of wasting time until a slot higher up the card becomes available?

Next was a 2-on-1 handicap match, Apollo Crews and Kalisto versus Dolph Ziggler. Did I mention I was eager to get to the main event? This just heightened the urge. I mean, come on. From the kayfabe taking out of Kalisto, to his valiant return, there was little fresh or engaging here. Nothing relevant, either.

The meaner Ziggler does nothing to reinvigorate his character. Wrestlers usually need a change when they’re not over with the fans or need to mask a lack of in-ring performance. Every crowd loves and appreciates Dolph and his technical ability is second-to-none. Fact.

He languishes in the mid-card (with a meaningless defeat here) due to poor handling by WWE “Creative.”

If the SmackDown Women lag behind their red brand sisters, the blue tag division is virtually redundant. There are enough teams to make it work but not enough time spent developing them.

A turmoil tag match for the titles saw teams come out one at a time, face elimination, then the next in line to challenge.

Former champs Heath Slater and Rhyno saw off Breezedango and then The Vaudevillains first. Both of those teams should have been built up to credible threats by now. Although, Breezedango did dominate.

The Usos finished Slater to square off against American Alpha. The reigning champs are hope to teams leaving NXT that they will continue to be booked as powerful forces. They overcame the veterans but it took a surprise small package to do so.

Enter The Ascension, the reason NXT Superstars worry about life on the main roster. Once booked as the modern-day Road Warriors, the promotion turned them into jobbers. Could this be their chance to profit from The Usos hard work?

No. They still tasted the familiar cuisine of defeat.

Next was Nikki Bella against Natalya. The former deserves props for becoming a legit performer, the latter, commiserations for being overlooked when her ring technique was being under-utilised for too long. By now, in the twilight of their careers, chasing the main prize has passed.

The New Era means these sorts of matches are thank you and farewell. As a contest, it was good. Bella took the bumps that the Canadian can so easily provide. A double count-out just means we’ll see more of them together as we stroll toward Nikki’s retirement. The backstage spat later just a reminder these have unfinished business.

In an absolute given of a result, Randy Orton defeated Luke Harper in their 1-on-1 match. Orton just had to win. Had to. Otherwise the WrestleMania main event would have been devalued. Also, Harper taking him to the edge, with only an RKO Outta Nowhere able to see him off, was a given.

Harper needed to be booked strong in defeat. The match had good flow. Even a superplex from the top rope, not easy with the size of Harper, added to the action.

The question remains: how will these two operate within the Wyatt Family dynamic now, especially with the Chamber match still looming?

In a night of easy to predict results, the Women’s Championship match threw a curveball. Naomi defeated Alexa Bliss. It looked like this was a placeholder bout before Bliss got a real WrestleMania opponent but no, WWE made Naomi the hometown champ. 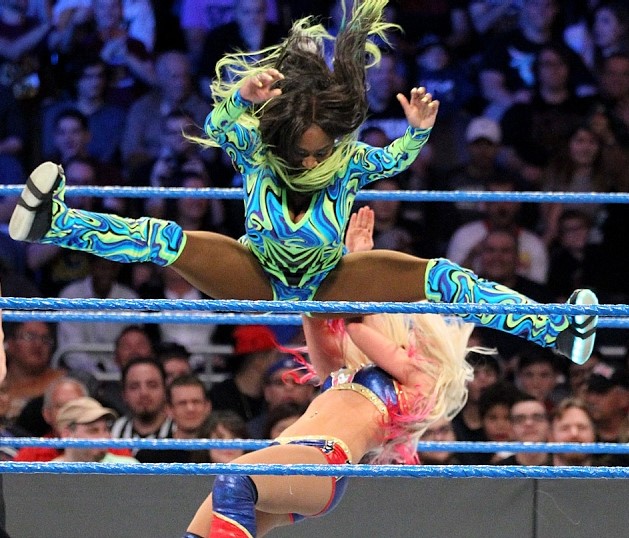 What made it worse (not that the result is that bad, but we’ll get to the problem in a minute) was the botched finish. High octane matches drain the body and allow mental fatigue to creep in. This was a perfect example and further highlights why Charlotte and Banks are leagues above everyone else.

The crowd didn’t seem to mind (they chanted their approval) but it all feels contrived. From the dance music and glow stick style paraphernalia from European raves of the late 90s and early 00s (something I’m very familiar with), to the feel good story of Naomi going home as champ, none of it felt authentic.

She looks as comfortable holding the belt as she does trying to dance to music she’s culturally unaware of.

Also, how is it she is still going to be champion come WrestleMania? Does Bliss not have a rematch clause or has WWE done away with those now, as even the men seem to be passing them up?

Then came the Elimination Chamber.

The match was in the “new” chamber. The difference: there’s safety mats in place of the unforgiving chained surface, and squared off, larger pods. A PG chamber for a PG era.

Styles and Cena gave us an abridged version of their previous encounter. A look at the clock showed we wouldn’t get a long chamber match so they quickly got the main spots and near falls. We knew Cena would drop the belt, and 99% certain it would be to Wyatt, Styles was the 1% chance for a surprise of sorts.

The Lunatic Fringe was first to leave his temporary prison and his contribution early on was to enable Cena to deliver a double German suplex. Ambrose was never going to win here. The commentators remarking a victory would make him only the second man after Ultimate Warrior to hold both the Intercontinental Title and the WWE Championship ensured he’d fail.

A minor surprise came when Wyatt was second to emerge from the pods. It was safe to assume he’d appear late and snatch a victory. Now it meant he’d have to work for one. But he did a good job of still taking shots a champ should avoid.

Corbin came next and ran riot, clearing the ring. He has been booked to look strong. The Chamber match was all about reinforcing the view he’s a future threat before selling him short. That happened with a cheap Ambrose roll-up. Once eliminated, he took immediate revenge on Ambrose.

The Miz also ran riot. He mocked Daniel Bryan by using his kicks, followed by a double drop kick on Cena and Wyatt. You could see it pained Cena to sell them well. Then Miz took turns on all three men in each ring post.

He has been Superstar of the year (perhaps tied with Styles) and this was his just reward. He could never win the match – not many mainstream fans would buy into Miz/Orton as a WrestleMania main event – but he deserves to be considered as a future WWE Champion.

So it is immensely frustrating that he was removed from the match after receiving zero punishment and one AA from Cena. The crowd booed and rightly so. It undoes all the work of making him look like a real contender.

Down to the final three.

In a result that shouldn’t come as a shock, the nature of Wyatt’s victory was. There was no Orton or Harper appearance. He made this writer Tweet: #SisterAbigailOuttaNowhere, when he eliminated John Cena first. So, we knew a new champ was happening. And the 1% became 40% all of a sudden.

But another Sister Abigail wrapped up months of storytelling.

It’s an occasion that the obvious result is okay. But now WWE needs to ensure it avoids obvious WrestleMania resolutions. The glaring one would be to have Orton turn and backstab a title win at the Grandest Stage of All.

What makes more sense is to have Harper emerge at WrestleMania (with Erick Rowan, would be even better) to ensure Bray keeps the belt. The story would be more powerful if it emerges the Wyatt Family knew Orton was going to cross them, so tricked him instead, proving their cult has an unbreakable bond.